So, Jon is stuck in jail, and possibly could go to a formal prison for the remainder of his time left to fulfill his four-year prison sentence.

His sentence was issued from the honorable Patrick Donahue on October 21st 2022, in court room C-40, at the Santa Ana Orange County Superior Court. Yesterday morning, in that same court room, Jon Woods’ hopes of being released from jail until his appeal hearing were dashed when Judge Donahue ruled against granting bail.  Woods was found guilty by a jury on August 1st 2022 on 37 counts of workers' compensation claims related fraud.

The court room opened to its usual beauty at 9 am with its glistening wood and comfortable blue with white flecked audience chairs.  Only the side walls are off-white dry wall.  The judge’s bench, the attorneys’ long table, and the low walls separating the court well from the audience and the jury box are all wooden.

This time the attorneys, prosecutor Noorul Hasan, and defense attorneys Rod Pacheco and a co-counsel who was introduced as Mr. Stretsky, plus 20 or so members of Woods’ support group, waited and waited in the court room just burning up time while only a couple of other cases were called and heard quickly.   Rod Pacheco wore a fine and... Read More 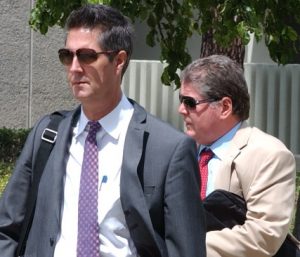 Lonce Lamonte | November 29th, 2022
In May of 2011, the Orange County District Attorney brought forth an Indictment against Sim Hoffman, M.D., a radiologist based in Buena Park, California.  It had 884 counts of workers’ compensation claims related fraud allegations.  Most of them were under LC 550 (a).  That’s a huge number of counts.  It may be unprecedented, as this... Read More 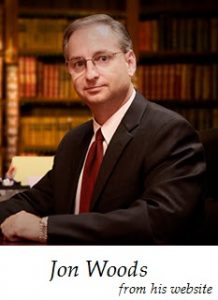 Lonce Lamonte | November 6th, 2022
The bail hearing for applicants’ attorney Jon Woods in Orange County Superior Court on Friday morning, November 4th 2022, didn’t happen.  It got continued. This was surprising because defense counsel, Richard Wynn, didn’t mention there would be a continuance and he was in communication with this writer the day prior.  He even sent a copy... Read More

Jon Woods hopeful to be granted bail at his bail hearing on Friday, November 4th 2022 in Orange County Superior Court. He has filed an appeal on his four-year prison sentence.

Lonce Lamonte | November 2nd, 2022
Applicants’ attorney Jon Woods, who is presently incarcerated in the Santa Ana central jail, is scheduled for a bail hearing.  It is on calendar in court room C-40 for this coming Friday, November 4th 2022. Woods was found guilty of 37 counts of workers’ compensation related fraud plus a white collar crime enhancement by an Orange... Read More

Jon Woods sentenced to four years of incarceration by Orange County Superior Court.  Judge Donahue expressed this is not a situation “where I believe you’re an inherently bad person.”

Lonce Lamonte | October 22nd, 2022
Jon Woods didn’t have his sentencing hearing called until late in the morning yesterday. All other kinds of cases, mostly ones with the defendant appearing remotely through WebEx, were heard first.  The bailiff, Deputy Murray, kept moving around the court room making sure the sound was working. But then Jon finally came out from the side door,... Read More

Diana Gonzales testified she worked for Jon Woods’ law firm and not for the photocopy company.  Intakes were sent to Accu Sign-Ups directly by Centro Legal.  Woods’ sentencing is tomorrow at 9:00 am.

Lonce Lamonte | October 20th, 2022
Jennifer Friedl, the DA investigator, was the last prosecution witness to testify at Jon Woods’ trial on July 19, 2022. She remembered many emails that were talking about the procedures for the call centers. There was one call center in Tijuana and another in El Salvador.  The employees were instructed to get the callers to... Read More

Applicants’ attorney Jon Woods to be sentenced on Friday, October 21st, in Orange County Superior Court.  Investigator Jennifer Friedl was the last prosecution witness to testify at his trial.

Lonce Lamonte | October 19th, 2022
Jon Woods testified in July of 2022 at his latest trial in Orange County stating he personally worked on his workers’ compensation applicants’ work 25% of the time.  The work comp legal work was done mostly by others.  So, he worked 75% of his time on his real estate projects.  He wasn’t specific about which... Read More
Next Page
Next Page >

Jon Woods hopeful to be granted bail at his bail hearing on Friday, November 4th 2022 in Orange County Superior Court. He has filed an appeal on his four-year prison sentence.

Jon Woods sentenced to four years of incarceration by Orange County Superior Court.  Judge Donahue expressed this is not a situation “where I believe you’re an inherently bad person.”